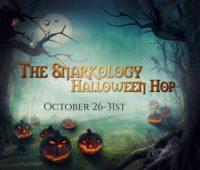 Sometimes you want to party without having to visit a haunted house or a masquerade. But first you’ll have to win the approval of a guardian.  Like in the excerpt below, from Enchantress’ Destiny, where my hero Rowe confronts the mysterious Caretaker of the Elfshore.

Rowe Calder pushed open the plain wooden door of the ElfShore and entered the club. He stepped to the side so his friend and bodyguard, Derwyn, could cross the threshold. Shadows shaded the hardwood floor and danced against the unadorned beige walls.

Derwyn flicked his long, white-blonde bangs from his eyes. At five-foot-nine inches, he was stockier than Rowe’s own lean, five-eleven. But Derwyn was the best tracker in the clan. And the quietest.

Rowe blinked until his eyes adjusted to the dim light. His gaze alighted on the two staircases before them. The one on the left headed downstairs and pulsed with an eerie red glow. Silver bells tinkled from the right upstairs stairway and it glimmered in alternating shades of pale blue and green.

“Welcome, gentleman,” a deep voice crackled behind them.

Turning, Rowe watched the caretaker materialize from the shadows of the corner. The older gentleman was thin, dressed in a gray tuxedo with short, silver hair and not a strand out of place. His face was the most distinguishing aspect of his appearance; a wrinkled, weathered dark brown complexion accented the harshness of his boney skull. His stormy gray eyes blazed with power.

“May I have your keys?” The caretaker held out his thin skeletal hands, his lips turned down in a grimace.

The ElfShore was exclusive in its clientele; only the most powerful could enter and enjoy the amenities. Derwyn readily handed over his deep black onyx stone. Rowe waited until the caretaker returned Derwyn’s channeling stone and then surrendered his own rock of green polished malachite. He needed the grounding and extra protection against negativity, even if it meant cleansing the powerful stone daily.

Rowe lifted an eyebrow at the almost-command. He was a prince of the elves and didn’t follow the commands of anyone. He strolled toward the left staircase, past Derwyn. Take the case of his arranged marriage. It was unheard of for anyone in the leadership clans to reject a marriage, he even understood the need to mingle the powers of the clans, but he refused to take the chance of falling prey to the dark curse threatening his life. On the day he completed the marriage bond with his true love, his life would end.

He’d managed to stare down his father, leader of the second largest elven clan and ignored his betrothed. Disregarding the directions from a simple guardian didn’t concern him. He stopped at the top of the staircase. “And if we stayed together tonight, and I choose to follow the staircase down?”

The world stilled, no sound could be heard, life existed between heartbeats, the pressure of power weighed heavy in the air.

“You know the rules, Mr. Calder. My words are but a suggestion. The ElfShore takes no responsibility for the safety of our guests. Your will is yours to command. Those looking to enjoy the darker side of passion go below and those looking for a quiet, relaxing night ascend.”

One moment the caretaker stood before them and the next he was gone, a ghost among the shadows. The world snapped back into existence. Heady laughter drowned out quiet murmurings and yet neither muffled the thumping of Rowe’s heart. There was nothing simple about the power at this guardian’s command. The Goddess conveyed her desires many ways; even he knew to heed her messages.

“And your decision?” Derwyn asked, a sparkle of mischief lighting his gray eyes.

Rowe hesitated. He almost took a step onto the left staircase, but a gentle tug on his powers drew him toward the right one. “Perhaps it is best to do as we are directed.” His gaze remained riveted on the right stairway.

“As you command, my prince.” Derwyn chuckled, gave Rowe a nod, and then bounded down the stairs.

Wary about what awaited him upstairs, Rowe casually climbed his way to the club’s upper floor. His right hand trailed along the wooden rail while his left hand fingered a silver coin in his dark gray slacks.

The soft gurgle of water poured through the sound system. The upper room was wide open with small tables diagonally spaced to create the impression of intimate conversations. Miniature orbs of white twinkling fairy lights lit the ceiling and the area around the bar. Large red flowers bloomed from potted trees along the walls, and beside the dark walnut wooden bar, underwater spotlights bathed an indoor waterfall in a pool of soft green light.

The bartender tonight was a Kinnaris. Nameless, the women lived in bevys of eight. The only way to distinguish a Kinnaris was by their coloring. This bartender possessed pearlescent skin and the bright white-feathered wings and tail of a swan. Beings of immense grace, they enjoyed music and dancing, the perfect purveyors of a bar. The woman tilted her head and gave him a half-bow. A formal acknowledgement of his status as an elven prince.

Typically this space provided a casual mingling atmosphere for mass gatherings. Tonight, it was different. The layout created a more intimate setting for patrons to separate into pairs. His palms itched and he had a desire to flee before something irrevocable occurred.

Then he saw her.

Two couples quietly talked on the opposite side of the room, but ahead of him in the back corner an elven woman sat alone. His attention focused on her. The self-confidence she exhibited by sitting alone, unaffected by the romantic atmosphere augmented her slender elegance and drew him.

Although her face was square, there was a hint of mischievousness that softened the harsh lines. And he couldn’t ignore her long, butterscotch blonde hair. It fell to her waist and he had an irrational desire to see it spread across his bed. The forest green dress with puffy, short sleeves and a tightly cinched bow emphasized her chest.

He needed to claim her. Now, before someone else discovered her sweet essence. He should be terrified by his desire, because tying himself to anyone would engage the curse overshadowing his life.

But he couldn’t help himself. He had to meet her. Had to feel the rush of her power entwined with his.

He crossed the room and sat across from her.

She tilted her head to the side. “And what if that chair is taken?” Her brown, green and gray tri-colored eyes sparkled with mischief.

He looked around. “I don’t see anyone watching you. If you were mine, I wouldn’t take my eyes off you.”

“Any man I’d be with would trust me to handle any unwanted attention.”

The challenge in her voice heated his blood. Their interaction was only an appetizer. He looked forward to their engagement and hoped it would end with her in his bed.

He stuck his hand out. “If you get to know me, then you can’t claim any unwelcomed attention. My name is Rowe.”

She placed her hand in his without hesitation. “Nice to meet you. You may call me Claire.”

He rubbed his thumb against her smooth skin. “Why don’t I get us some drinks? Talking can be a thirsty business.”

She stared at him and then the prickle of earth magic washed over him. Nothing overt, but an aggressive testing of his intentions. This woman took no chances. He approved.

“Very well, a bit of fun this evening would be welcome.” Her smile disappeared and the energy around her dimmed.

He preferred her glowing with happiness. If nothing else, he vowed to give her an enjoyable evening, to see the sparkle return to her expression.

“I’ll have a nectar spritzer.” Her voice soothed him, enveloped him in a sensual embrace.

He nodded, stood and walked back to the bar. Anticipation heated his blood. Maybe he wouldn’t have to sleep alone tonight. It would be a welcome distraction from the business concerns that brought him to Wildeloch. 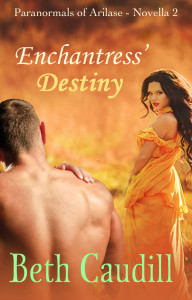 In a land ruled by magic, can two elves break a dark curse and forge a new destiny together?

Clairessa Bellehaven may be a princess, but she’s also the loneliest elf in Wildeloch. She spends her days analyzing spell books, and her nights dreaming of someone to share her life. This seems unlikely, after her betrothed, Prince Rowe deserted her and her latest beau betrayed her trust. Surely just one night of passion with a handsome elf will do no harm … that is, unless the Goddess finds out.

Rowe Calder, elf clan prince, can no longer delay returning home if he is to save his family’s livelihood. But once there, he finds himself under the spell of his lovely bondmate, Princess Clairessa—the woman destined to cause his death. He’s a powerful elvish prince, surely he dares risk one tryst with her.

But there is no hiding from the vindictive curse cast long ago. Rowe will have to fight for the safety of everyone he loves, including Clairessa. And Clairessa must use the most powerful spell of all to save her prince—love. Will it be enough when the dark elf comes to claim a soul?

Leave a comment about your favorite scary hangout for a chance to win this bookmark.

Don’t forget to visit the other authors participating in the Snarkology Halloween Hop.